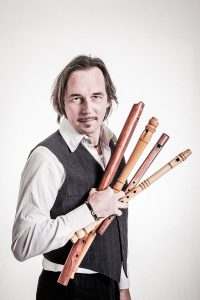 Göran Månsson plays flutes, pipes and recorders. Göran ranks as one of the most exciting and dynamic flute players on the Swedish folk music scene.

Among a lot of projects he have a flute designed by himself ‘Månmarka pipe’ also a academy for folk flutes ‘Folk Flute Academy Haverö’. Maybe that shows how important he is for the flute players in the north of Europe.

He comes from the small town of Haverö in Norrland in the north of Sweden. As a descendant of one of Sweden’s celebrated folk music families, Göran is actively furthering the Swedish folk music heritage. Göran performs with the folkmusic group Gjallarhorn and also the folk-pop group Sarek which was one of the artists in Eurovision song contest 2004. Other groups: Göran Månsson Band, Gjallarhorn, Frispel and Månsson&Åberg

He also performes as a soloist and his first solo album Inland (Drone) was released in December 2002 to widespread critical acclaim. Mon (Nordic Tunes), released Japan in June 2006, and September 2006 in Sweden, is Göran Månssons second solo album. What is quite uniqe with this production is the meeting beetween Göran and guitarplayer Roger Tallroth (Väsen, Ann-Bjorg Lien etc.), who also is the co producer. Two innovative and strong musical personalities together on this cd. ‘Mon’ was nominated for the Manifest price in 2007.

Göran is very much in demand as a session musician for both early music and folk-pop recordings and has toured the world as a percussionist and flute player. He’s currently one of the most interesting nordic folk acts in Japan. He is a graduate of the Royal College of Music in Stockholm and teaches at Royal College of Music in Stockholm. Sibelius Academy in Helsinki and Oslo Music Conservatory. He is also Censor at the Conservatory of Music in Odense.