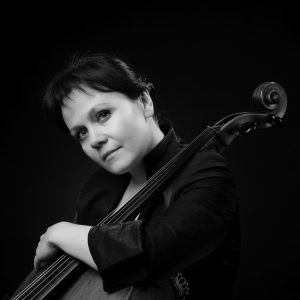 Olga was born in Russia (Saratov). She started playing cello at the age of seven. Olga got her musical education in Moscow and Hamburg. Having graduated from the Hamburg University of Music, cello class of Prof. Wolfgang Mehlhorn, she actively started her concert career as a soloist and a chamber musician.

Olga performs together with such pianists as Irina Schnittke, Geoffrey Madge, Ralf Gothoni, Vladimir Skanavi; violinists – Alexander Brussilovsky, Katarina Andreasson, Mark Lubotsky; violists – Vladimir Mendelssohn, Ferdinand Erblich and others. She is a permanent member of the “Lubotsky Trio” together with a violinist Mark Lubotsky.

Among the works of romantic composers Olga Dovbush-Lubotsky pays a great attention to the contemporary music of such composers as Sofia Gubaidulina, Alfred Schnittke, Alexander Raskatov, Viktor Suslin, Valentin Silvestrov often taking part in their recitals. She successfully played the Dutch premiere of Sofia Gubaidulina’s “Repentance” for cello, double bass and three guitars in the Netherlands, Groningen, in 2010.

Along with her concert activity Olga currently heads the cello class at the International Alfred Schnittke Music Academy in Hamburg.

She have made recordings for the BIS and NCA CD-label.

Sofia Gubaidulina, the world-renowned contemporary composer, describes Olga’s playing the instrument: “… The perfect mastery of her instrument, her flawless intonation as well as her overall very high musical culture allow her to find the right shades and colors in works of diverse styles and ages. She is rightly a soloist, but also enrichment to any ensemble”.