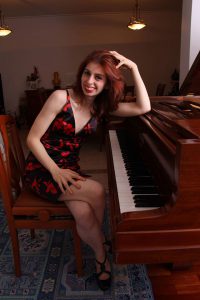 Graduated from Lisbon’s Superior School of Music under the orientation of Tania Achot, Teresa da Palma Pereira has also studied with Artur Pizarro, Grigory Gruzman, Jan Michiels and Claudio Martinez Mehner. She participated in master classes with famous pianists such as Helena Sá e Costa, Sequeira Costa, Paul Badura-Skoda and Dimitri Baskhirov among many others.

After concluding the Master’s Degree in Performance at Catholic University of Portugal, has engaged and concluded a Post-Graduation in Royal Conservatory of Brussels, where she won a contest amongst the best students of all instruments, so to act as soloist with Chamber Orchestra of Brussels.

Is now making her PhD in Music Performance at Center for Investigation in Science and Technology in Arts of Catholic University of Portugal, under the orientation of Professor Sofia Lourenço.

Has performed also in contries like France, Italy, Belgium, the Netherlands, Hungary, Sweden, Brazil and China.

She created, in 2014, one season of recitals, recorded by antena 2, called “Comunicar com Música“, in Fundação Portuguesa das Comunicações. Teresa da Palma Pereira has released until now two albums, one solo album “Transfigured Waltz”, with works by Schubert and Schumann, and one album with orchestra “Brahms: Piano Concerto n.º1”.